The first time I heard about climate change was in the early or mid-’80s. My babysitter (the lovely Mrs. B.), her cozy back turned to me while she washed the lunch dishes, delivered this warning about the future:

“In fifteen years, the climates of Nova Scotia and California are going to be switched.”

I don’t remember anything else about this conversation, but it was clear from her tone of voice that she felt she was giving me really terrible news.

My response was mostly confusion, for how could such a thing possibly happen? All I could do was imagine a pair of giant hands coming out of the sky and plucking NS and CA clean away from their moorings and rearranging them, leaving every place in between where they were. (Not that I had any real idea of what lay between NS and CA; all I knew was that California was Very Far Away.)

As a result of spending far too much time watching American TV shows (mostly soaps), I also didn’t understand why Mrs. B was bothered by such this impending transformation. According to ’80s television–and before I could be made worried by the lyrics to “Hotel California,” Joan Didion’s essays about her home state, or evidence of America’s complicated relationship with firearms–California seemed to me to be heaven on earth. Sunny, warm, beaches everywhere, everyone looking good in skimpy swimwear, fun and joy and nothing at all to be afraid of, bored with, or sick of–this was my idea of California thirty-five years ago. Whereas Nova Scotia–

It rains a lot in Nova Scotia. And when it’s not raining in Nova Scotia, it’s often grey or foggy or windy, or all three together. When it’s neither raining, nor grey, & c. & c., my birthplace huddles beneath a persistent, almost existential, mizzle; or so it seemed when I lived there. No, if sunny California came to me directly and tangibly, rather than only filtered through the limited hours of American cable television, I could not be afraid or regretful.

My first exposure to the idea of climate change looks distressingly like fake news, but must have been the result of some serious misunderstanding and/or badly reported scientific data. At any rate, it was only a few years later that I had my first direct encounter with the environment commencing to give us a much deserved beat-down.

During my first ten years on this planet, I spent as much time as possible running around in the sun and never getting a sunburn; I turned a a warm beige-brown and that was that. My elders procured lotions to help them tan darker and faster; many used tinfoil to amplify the sun’s rays even more. Somewhere around 1985 or 1986, however, people started talking about there being a hole in the ozone layer–and right around the same time, I got my first sunburn, which was so bad it made me feverish.

After that, sun-worshipping became an increasingly difficult story to tell straight. The intervening years saw the invention of the UV index and and sunscreen, lots of skin cancer, but also people refusing to stop tanning till they looked like old leather. While not the most susceptible to burning (unlike my dad, who’s so pale he gets a burn just thinking about going out into the sun), I try to wear sunscreen whenever I go outside between May and October. Even so, the sun forces its way through those increasingly high UV numbers and I tan anyway and sometimes turn a little pinkish. I’ve heard that one or more of the holes in the ozone layer has shrunk significantly or even disappeared, but if so, neither my skin nor this city seems to have received that information. Maybe it’s fake news!

What isn’t fake news is that Toronto has done a lot of serious flooding in the past several months. The islands, usually home to an over-abundance of summer weddings, nuclear families taking day trips, and some hitherto very fortunate residents, has been closed to the public for months. Carp spawned in the baseball diamond; beds of tulips were replaced by sand bags and heavy hopes for a return to normalcy. The latest news suggests the islands will re-open early next week; but not without a nice dose of West Nile virus to go along with the dropped ice cream cones and being herded like sad cattle while waiting to board the ferry.

The trails on which I regularly ride my bicycle have spent a lot of the last few months partially under water and/or surrounded by bogs where, last year, dry underbrush lay. Any two-wheeled dignity I’d ever had had to be abandoned immediately: some of the puddles on the trails were so deep that unless I raised my legs ingloriously up and out from my peddles, I became the victim of some really desperate soakers, the kind of soakers I used to associate only with the particularly slushy month of Farch down east.

Speaking of down east, Toronto’s abnormally civilized temperatures and over-abundance of rain this summer remind me a lot of what I (still) crankily refer to as “the cursed summer of ’96.”

In the summer of 1996, I moved into a damp basement apartment in Halifax with two friends from high school. I had my first full-time job–a mat-leave contract at the Dalhousie University library that paid me an exorbitant $8/hour–and I spent that mad cheddar primarily on rent and very pretty summer clothes.

Good investments–except that it never once got above 13C that summer. And because I had more money than sense, I wore those pretty clothes anyway and spent the whole four months of fog and rain and chilling wind shivering and looking like a well-dressed, but under-dressed, nincompoop. 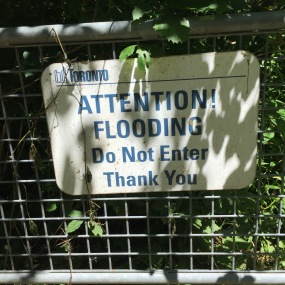 This summer in Toronto is warmer than that summer in Halifax, but it’s hard not to recall it almost daily when everything’s flooded or on the verge of becoming so again, and going outside during the day generally doesn’t feel like a health hazard. But in spite of the flooding, it’s hard for me not to feel immensely grateful that it’s not hot the way it’s supposed to be here. The foliage is blooming and robust, when it usually looks scorched and demoralized by now. I usually look scorched and demoralized by now.

It’s hard to see climate change in a positive light in the long run, of course. Except for water bears, apparently, we’re pretty much all doomed; yes, even cockroaches. The only question about our doom seems to be when we’ll finally go the way of the dodo and Friendster.

(It’s admittedly hard to feel sorry for cockroaches, even if they aren’t the punk-ass toughs we’d always imagined them to be; but it’s maybe even harder to lament the loss of our own species when some of its better educated members think cockroach milk should make a healthful addition to our diet.) 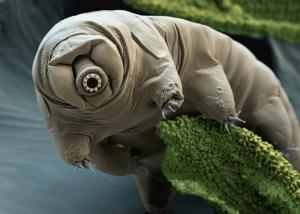 In the over-watered, post-human, post-cockroach world, the water bears will have a lot of ground to cover getting from one place to another. I propose we stop focusing our scientific efforts on harvesting the juice of lactating insects, and instead do something Good and Right for the adorable, tiny, indestructible beasties that will inherit this shockingly polluted earth.

Using nanotechnology, we can build them wee bicycles so that they, too, can experience the unique and unparalleled pleasure of riding through flooded recreational paths. These bikes will also be invaluable when, in a million or so years, water bear archaeologists need to get to remote digs to study the remains of our bones and books and other mysterious doodads. I can’t think of a better legacy for the human race.