Never mind that dramatic, emotionally wrought title: let’s talk about science. Specifically, let us consider how we may effectively communicate to one another, but especially to doctors, precisely how badly we are feeling as a result of winter illness. From your common cold to double pneumonia and the whole wondrous cornucopia of wracking joys between, I believe it’ll help us all feel better, both emotionally and physically–the latter because health professionals inured to everything but gushing wounds and outright death will perhaps not need so often to be sharply reminded that a sinus infection is actually a really quite terrible thing, if we’re all speaking the same medical language.

A friend of mine has a very precocious 6-year-old; his precociousness manifested very early, specifically in terms of both language acquisition and in creative use of said language. (I know this transition, or lack thereof, may have seemed abrupt. Just trust me.) His first word was “pizza-dough.” When he was about 2, he looked up at the de Lempicka on my dining room wall and gleefully exclaimed, “Boobies!” At about 3, he thoughtfully informed me that bananas were a kind of cactus.

Last year, in a single conversation, during which he charmed us with his words in the hopes we wouldn’t notice how little of his dinner he was eating, he proposed a certain alteration in anatomical terminology: “You know the bag at the end of your penis?” Three adults and 1 younger sibling waited silently for the awkward revelation that must follow such a grand rhetorical query. “That should be called your bean bag!”

Not 10 minutes later, as he continued to push his dinner in every direction save towards his own mouth, he informed us that the unit of measure for ketchup was the bonk; further, that he currently had 4 bonks of this delicious condiment on his plate; finally, that this was directly (but to me, I confess, murkily) related to the relative stability of supporting walls in houses and how much harm they’d cause a person should they fall upon that unsuspecting person’s head.

Reminiscent of the sort of experimental but confident bullshit Renaissance philosophers and medical “experts” came up with in the face of the mysteries of the human body (say the humours or the wandering womb), I think we should all take the learnèd mantle of naming authority upon ourselves with similar dash and unearned confidence. We will combine this historical confidence with the true fact learned from my friend’s first child, namely: there is, or should be, a unit of measure for literally everything on earth. For now, we will restrict ourselves to winter illnesses, for it is early January and lo, much coughing and sniffling lay upon the post-holiday land; also, I am suffering from one such seasonal affliction myself.

It seems obvious, so we’ll take it as given, that when referring to winter illnesses, we’re really trying to quantify the experience of feeling dreadful. So…head clutches? fathoms? whinging decibels? whinging frequency? time spent, not napping, but merely laying very still with eyes closed until one is interrupted by coughing, sneezing, the need to blow one’s nose? or the frequency or duration of such interruptions? 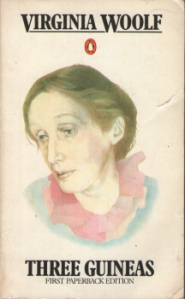 I think I have it: font. Specifically, the minimum size a book or paper or magazine or screen’s font needs to be for the sick person to be able to read what is in front of them without their already nearly intolerable headache becoming worse. E.g., I found out yesterday while reading Virginia Woolf’s Three Guineas in a lovely, 7-point-font old Penguin that I was experiencing a 10-point-font feeling of dreadfulness. (I finished it anyway; it’s Woolf; no one’s more worth inviting the imminent implosion of one’s head than she is.)

I have made two scientific breakthroughs today: first, obviously, the unit of measure for feeling dreadful during times of clinging winter un-wellness will become an international standard within the week (because the internet moves nearly at the speed of light; this, also, is science). Second, I can now track and begin to outline the deleterious effects of reading things presented in dangerously too-small font at such critical moments in the progression of a cold, flu, bronchitis, etc. For example:

Many years ago, I lived in a lovely little apartment in Halifax with a roommate who attended a different university than I did and who was at that point never actually home. It was glorious: I read for hours on the fantastic couch she’d brought with her; I spent even more hours reading in the truly unparalleled reading chair she’d also contributed to our shared furnishings. The only problem was that, like these last two years or so, I was sick all the damned time. And when it comes to reading and sickness, one of two things happens with me: I either have the sense to read some 24-point-font YA fantasy or, and this is far likelier, I feel irresistibly compelled to read something printed in the tiniest of fonts and containing content designed to make me feel much, much worse. 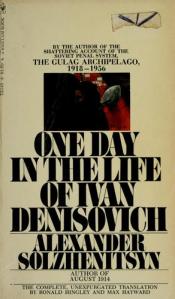 That year, in that perfect almost-my-own apartment, with a delicious admixture of bronchitis and tonsillitis topped with a fever that wouldn’t go away, I decided to begin reading Aleksandr Solzhenitsyn’s One Day in the Life of Ivan Denisovich. It wasn’t long before my life pretty much fell apart; and how could it not? I was treating my 18-point-illness with an 8-point-font book: I missed classes (I never missed classes then); I missed work (I loved my job at the university library, so this was truly desperate); I twice in a row cancelled dates with a boy with amazing ’80s rock-star hair who, being rejected twice in a row, declined to make a third attempt; and I didn’t even finish the book! When I began hallucinating about someone trying to steal my little spade from me, I gave up and didn’t read anything till it was all over.

I knew being a doctor of literature was going to bridge major medical and scientific gaps eventually, and here we are. I’m feeling so super-excellent about this (if not about the fact that what’s preventing me from going to the doctor immediately, to loudly demand antibiotics, is that I can’t go 5 minutes without blowing my nose), I feel certain I can now, in good faith, begin listing my title as “Dr” when booking airline tickets again.

Further, I will also pen a highly successful book about how ridiculously easy it is to transfer skills from a PhD in the humanities to any number of other professions without having to engage in any further training whatsoever. In case this causes people stress because they can’t reconcile my extremely confident claims with the realities of the job market as it applies to their own lives, I will make sure the book is printed in at least 20-point-font.