There’s something inherently shabby and doomed about corner stores, even when they persist over many years; even new or renovated, they tend towards an atmosphere of decay and fatigue.

The official story is that my neighbourhood is gentrifying, and over the past few years, house prices have skyrocketed in confirmation of this claim. However, the houses don’t always sell in a week or less, as they seem to in other parts of the city, and sometimes it takes months and months. More importantly, the only sorts of businesses that seem to survive here are convenience stores, and sometimes they don’t make it either.

The one closest to my house (called Family Mart, which is a blatant case of false advertising, as no families are available for purchase there) is a fairly recent revamp of an old disaster known as Uncle Don’s. It’s bright and unusually clean and doesn’t smell weird, the latter of which is, as you no doubt know, a miracle not visited upon many such establishments. 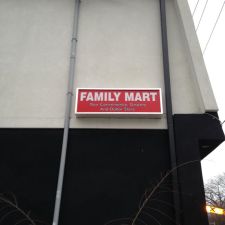 But the crumbling has already begun for, though it’s been there only about a year, there’s an invasive and nearly un-killable tree/weed growing up between the sidewalk and the nicely stuccoed north-facing wall. Having fought a terrible battle with the same weed as it tried to strangle the foundation of my own house, I know what danger lurks there. So far, the store owners haven’t addressed it. The leaves are off and it is in shallow hibernation till spring comes again, but it will roar back–and it’s already about 6 feet tall.

I have a terrible, nearly irresistible, urge to skulk over there in the middle of the night with my gigantic pruning sheers and solve this growing problem for them. But I somehow can’t; even doing the right thing under cover of dark seems wrong; also I’m too Canadian AND too much a product of my neighbourless neighbourhood to simply ask the owners directly for permission.

Before this incarnation of my corner store was born, there was, as I say, Uncle Don’s; Uncle Don was its only employee. I bought a couple things there before he packed it in and the place was gutted to make way for a fancy furniture store that didn’t last 3 months; but I never purchased food items from him, only things like umbrellas and kitchen garbage bags were safe. The place didn’t just smell weird, it had a stench, though of what I have no idea; but if killing boredom, deep regret and a slow succumbing to scurvy were part of the mix I wouldn’t be surprised.

At the centre of this terrible mess was Uncle D himself. A blank stare, immobile features and stilted movements were revoltingly complemented by his habit, in summer, of sitting on the front step picking the green, scaly scabs off his shins. God, how I wish this were hyperbole or, better yet, fiction; but it isn’t. He sat in front of his shop and picked green stuff off his legs and then handed back change to the few customers he had with those same hands. Uncle Don lived in the strange borderland between real, everyday decomposition and the opening scene of a body horror film.

Corner stores may be the only real loci of the gothic remaining in large urban centres like Toronto. Their alienation from the increasingly slick, large and antiseptic experience of shopping for anything else, almost anywhere else, would seem to threaten them but I think it might actually guarantee their grotesque survival. It’s not really convenience that keeps them in business, I don’t think; there may be corner stores everywhere but they’re not particularly convenient, either for allowing customers to get everything in one place or to for helping them save money–just the opposite, in fact. The one next door to me carries printer paper, but it doesn’t even carry pretzels; it carries birthday cards and cat food but not hand soap. And in this neighbourhood, none of the corner stores are more conveniently located than the two grocery stores book-ending it, so their survival must be attributed to something unrelated to their proclaimed reason for existing.

I think corner stores persist out of some kind of demented nostalgia and likely false memories of not needing to worry about money, the need to eat vegetables or general cleanliness. I’m not saying we all grew up in total grime but there is a certain hysteria these days that simply didn’t obtain when I was a kid. There were no antibacterial soaps; kids were encouraged to play literally wherever; the babysitter put coins in our pancakes on Shrove Tuesday; hell, there was a publicly available and widely sampled salt lick at the local museum of natural history! The latter is, to be both blunt and scientifically precise, totally icky; but surely there’s some middle ground between that and only letting kids out in over-sized hamster balls (which, I would bet money on, is just around the corner in our helicopter parenting world).

As I heard a tech guru say at a work function a few years ago, eventually everything from toilet paper to laptops to groceries will be ordered online and delivered by drone (a different but not unrelated kind of helicopter parenting). There’ll be no people allowed near us but the ones we let into our little plastic bubbles after they’ve been hosed down with industrial cleaners… I think I’d rather go out to the corner store, see people and pick up their damned colds–and some chocolate bars, a lottery ticket and a root beer-flavoured slushie, if I’m feeling particularly wild.