When I was a kid, I longed for summer with the power of a thousand suns. But, as I grew up in Nova Scotia where summer was a buttoned down and utterly un-dramatic affair—I think I recall it getting up to or passing 30C a handful of times; there would be maybe one night a year during which the heat made sleep impossible; an air conditioner was certainly never required—this is not evocative of a very intense passion.

Let’s say, instead, that as a child (and let’s be honest, as a teen and young woman too), I longed for summer with a pleasant and comfortable anticipation that never tended towards anything resembling pain or loss, or even very serious need. Summer was a delightfully cozy but short interlude, enjoyable to look forward to and then to reminisce about. It was long walks and reading outside and dozing in hammocks when they were available (and I still had that kind of spine); it was campfires at the beach at night, pretty summer dresses, sandals (when I still had those kind of feet); it was ice cream and chip truck fries and iced tea from a bottle. Summer in Nova Scotia was a slightly faded picture postcard, a bland and pastel-coloured dream, created by someone without either much imagination or a view of life tinged by suffering or a sense of encroaching disaster.

(Never mind all the rain; I’m sure I have no real sense of how much east coast summer rain I’ve really forgotten, which is probably for the best.)

Here in Toronto, summer is a dream whose seams have gone ragged from the constant wear of the nightmare it so easily and often becomes. My first summer here, there was a heat emergency that lasted a week; during that week it remained at 49C and a few people died. We had no air conditioning, so we took cold showers and cried and wrapped our poor, long-haired kitties in ice-water soaked towels and they responded with limp, tired gratitude.

There have been many such heat emergencies since I made this city my home; one fine year, the heat emergency lasted fully 30 days. Another summer, in the bookstore (which had no air conditioning and no insulation), it was hotter inside than out and I got heat exhaustion just from sitting there and reading; as I recall, I mostly refused to talk to the customers who were strong enough to stay for longer than 10 minutes at a time.

Last year, however, was an almost pure delight—20-something every day except for one high-30s to low-40s week, during which our central air conditioner broke. During those horrid 5-7 days, we wondered, again, why we’d chosen to settle in such a vicious hellscape; we drank iced ginger tea for the mild nausea and looked back fondly, as we tend to do every year, on those days when we loved June, July and August. 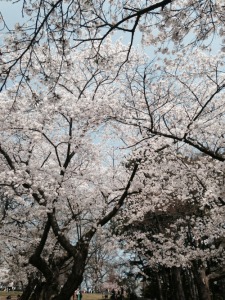 Every summer, I make jokes about Toronto’s hellish hot heat; the joke being, it’s so hot here, even grammar can’t survive it. It’s not a great joke; in any case, and more importantly, we’re not there yet. Right now, we’re deep into the quiet glory that is spring in Toronto. Spring here and now looks surprisingly like summer in Nova Scotia back then. It’s lovely and sort of unreal and it won’t last. While it does, I feel exceptionally comfortable and find it hard to stay in of a night. The smell of lilacs everywhere makes remaining at home, even with all the windows open, seem like a positive insult to nature. And bees—we saw no fewer than 4 on our walk on Sunday, which may be more than we’ve seen in as many years previous. 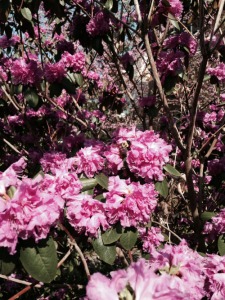 Life, in every form, is still in favour of itself right now. But unless we have another freakishly cool summer, that will soon change. All the plant life save the Japanese Knotweed will shortly begin to look regretful and mildly charbroiled; people will claim to love the heat but will also get the hell out of town just as often as they can; brown- and blackouts will threaten and sometimes occur as we all succumb to turning the air con on by late May and leaving it on until September.

Now, though, I swear to you that I can hear ice cream trucks and children laughing at the fair and first kisses and general contentment everywhere I go. But they’re already beginning to sound a little like memories of themselves. 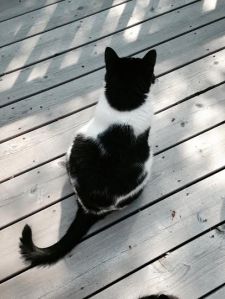