I love snow; and I love the look, if not the feel, of deathly cold days. But I saw a pigeon huddled desperately on top of a heating vent at Queen and University today; her feathers were blowing quite shamelessly up around her neck. This somehow makes being anything less than entirely honest impossible: I am also very much looking forward to Spring and Summer and Fall. 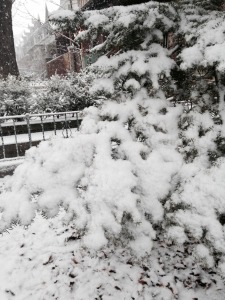 I am passionately thinking about those three seasons experienced in succession. I long to be able to ride my bicycle anywhere at all. In the meantime, I carry two pairs of extra socks with me at all times. When outside, I do not think deep, aspirational or even very coherent thoughts; I barely think at all. I mostly just worry about getting a soaker and becoming so miserable of shriveled, cold foot that I will be unable to prevent myself from weeping loudly and hysterically in public. This is what February looks like from here, when it’s not looking a benign and fluffy white.

Like everyone else, I’ve been too cold in my day, and I have no doubt whatever that the pleasure I do take in winter arises out of my certainty that it will end. When we owned the bookstore, I spent months on end being miserably cold (then dangerously over-heated, like a flophouse stove with frayed wires). The building that housed that losing game was not insulated and there were gaping holes in the wall that led directly to the world outside; in winter, little snow drifts piled up next to the rare book shelf. Between November and March, I wore my coat at work and sat hunched next to a space heater set to “something is going to catch fire very soon.”

I’ve been too cold too many times to enumerate, but here’s another good one: that time my husband and I had the bright idea of visiting Prince Edward Island in February. Granted, it was the coldest winter there in a hundred years, so not entirely representative, but…the ocean was partially frozen, something I’ve seen neither before nor since. I absolutely gawped. I felt the cold sneaking into the airplane as we descended towards that suddenly glacial little island. I had on almost everything I owned because we’d been warned, but upon leaving the airport (I was wearing so many layers, I was already moving like someone half-frozen) I knew I’d be dead in half an hour or less if I stayed outside.

My now-husband and I were on our way to my now-mother-in-law’s house, but we were not in a good way; we spent the whole trip flaying one another. The weather kept us locked up inside with our cold, withering and seemingly inescapable relationship; our bedroom added to the bodily and emotional agony by having no heating vent, so we kept the door open at all times and fought in low voices.

A thaw eventually came, of course, or we wouldn’t be married now. That delightfully slapdash ceremony took place on a cold December day filled with snow flakes and blowing wind and the flailing of dormant trees. We’d originally planned to marry in the reassuring heat of August but I’m glad we eloped to the wintery concrete chic of Toronto City Hall. I don’t wish to forget that we almost froze each other out; I don’t want to imagine that, as utterly happy as we are now, we might just as easily not have been.

Being happy, being warm—personally, I can only sustain the absence of these with any grace when I think the situation is temporary; ditto for doing any real thinking. Today, my feet and hands and face were very cold and when I go out tonight, they will be again. But my heart, my life, my loves are not cold; they burn stoutly, neither too hot nor at all feebly; they are constant buffers against a destructive past and an uncertain future.