Having fallen and pinched a nerve over five months ago, I’m enjoying an early taste (it tastes bitter) of one aspect of old age, at least as it’s appeared to me: A constant, dragging achiness mixed unwholesomely with chronic poor sleep. This unhappy nerve has made both sitting and laying down truly terrible experiences; I’ve had no choice but to spend a good deal of my time walking.

This is fine, at least theoretically, as I became a devoted and enthusiastic walker in the mid- to late-90s; faced with both having to learn to tolerate my own company and having no money, I wandered the streets of Halifax till I knew them better than anyone else in my life. I walked constantly then and I walked all this summer when I wasn’t able to sit in my corporate stall and have my brain properly and truly milked—which was a lot of the time.

I began my walkful, less workful than it should have been, summer packed full of guilt, but this wore off as I realized that I really had no choice; all my rest, sanity, productivity, ability to brandish corporate buzzwords with any grace, were wholly dependent on my relative physical comfort and ability to get any shut-eye of a night.

The summer wore on and then went its way; things may or may not have been improving with my back. But then I got sick last week; nothing big, just your average, first cold of the Fall—but dizzy, coughy, throat-scratchy enough to make working too much to contemplate. I went home early on the Friday and rested. I went to bed early, slept late Saturday. I didn’t feel any better, but as a 39-year-old with the bones of an 84-year-old widower with no one to remind him to take his calcium supplement, everything hurt, but especially that blasted pinched nerve.

I had to walk; I could barely walk. My legs felt like their bones had taken off for a weekend away. So my darling had to take me out for a walk to make sure I’d be okay. I dragged my feet over 3 or so km of unnecessarily warm city pavement; I held on for the iced coffee; the lineup at the coffee shop was out the door and down the sidewalk so we kept going; as we crossed the Don Valley, I contemplated laying down on that terrible shadeless bridge and waiting for some return of energy, vitals, muscles, anything.

We kept going and something miraculous happened—well, had already happened but it was our very lucky day: The gate to the trail leading through Riverdale Farm and its surrounding park was open. I’ve lived here coming on 11 years and have never seen that door open. The bones in my legs were ecstatic and started working almost properly again; they took me purposefully into the shade and towards the green and sluggish ponds.

There I was reminded of one of the things I love best about Toronto: Even now, it still frequently surprises me with its nooks of established foliage and their inhabitants; stuns me by having one more fierce little pocket of plant and animal life moving inside the ever-growing, increasingly dense masses of people and their space-filling gadgets, cars, houses, needs.

But in the woods and wee swamps around Riverdale Farm, my husband and I found ourselves alone with some unnaturally quiet children and their parents—and hundreds of dragonflies. Their wings glinted in the sunlight and made me a little nervous—these dragonflies were so small compared to the ones I remember from my teen years in Halifax; those were huge and tended to angrily loaf like street corner thugs on the laundry hung out to dry. These Toronto ones are mysterious to me—were they small because the environment they live in is also so small? Are their lives being literally reduced by the reduction of their habitat?

Or was I standing in a riot of dragonfly puppies out for a play while their improbably huge parents looked tolerantly down upon all of us, as we moved tentatively in our temporary little wilderness? They were playful, whether with the energy of youth or the sad flickers of dwindling chances, I don’t know; when I put my hand on my head in wonder at the scene we’d stumbled upon, one immediately landed on it and then shuddered its wings coyly when I carefully brought it to eye level. He flew away shortly after we side-eyed one another, but they all continued to buzz about and didn’t seem to find us very annoying; one even posed for a glamour shot. 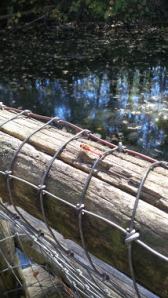 We also saw a small turtle floating by long slow inches through the pond on a mossy old log. She sat grave and still as carven figurehead, solemn captain and lost wanderer all in one. I think my husband and I were the only ones to notice her, which is likely part of why thinking of her is still making me feel kind of small and lonely.

We see dead animals on the road nearly every day—raccoons and squirrels and a variety of even smaller rodents, but also cats, sometimes dogs, and then there are the deer that find themselves somehow outside the fragile confines of the Don Valley and end up getting hit by a car on a residential street and then shot in the head by cops who don’t have time to wait for someone from wildlife services to arrive.

It’s too bad for us that we don’t notice the living ones in their joy while we can. A few years ago, I looked out the window as the train went above ground near Old Mill station and saw a giant buck swimming through the little lake there; I gasped a delighted “Oh my god!” and one other person looked up and saw him too; I heard his sharp intake of breath and knew exactly what he meant by it. Everyone else continued to gaze lovingly at their smartphones.

Every animal but the human is wildlife in this city; Toronto just isn’t made for anyone but us. And the parts that are preserved for beasties of various sorts are shrinking and must be shared, one way or another, with us and our fast-moving toys. Even babies in this city are becoming part of the wildlife adults are forgetting to look at; when’s the last time you saw a baby or dog being walked and their guardians weren’t texting or talking on the phone? Me either. 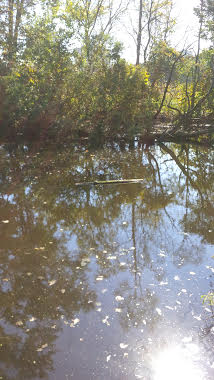