I recently wrote a gastronomical love letter to my husband over on Food Riot to celebrate the fifteenth anniversary of our meeting. (It was sometime between Sept. 12 and 16, 1998; I can’t remember exactly because I wasn’t trying to; it was supposed to be just a dirty fling. Ha!)

It seemed appropriate to combine two of my loves in one post this week: the Toronto Public Library and my marriage (which, yes, happened in December, not September, but we had to meet in order to later get married. Stop arguing with me.). We got married at Toronto City Hall and so obviously, my latest TPL love letter had to be addressed to the City Hall branch.

The City Hall branch doesn’t have one of those adorable outside signs like the other branches I’ve visited do. Or, maybe it does and I missed it. Or, maybe our mayor tore it down in a rage because the books were laughing at him. Anyway, I didn’t see it, but in some ways it doesn’t matter, because there are other landmarks to ensure one doesn’t get lost on the way to City Hall. It is very important not to get lost when one is looking either to get married or to borrow some excellent reading material: 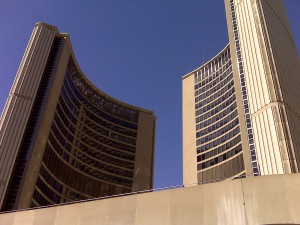 This is the view from a very fine picnic table outside City Hall. Go ahead and cue up the music from 2001: A Space Odyssey; you won’t be the first, but it’ll still be appropriate and in no way hackneyed or cliche. I mean look at it; it’s terrifying, even on a shining afternoon in early September. Hubby and I got married in the Wedding Chambers, which are on the third floor of the building on the right. The library is pretty much directly underneath this, at ground level.

I didn’t ask the librarian any questions today; I was feeling shy and jittery after having succumbed to the temptations of a shitty coffee from Fivebucks. But I would like to know, in retrospect, whether or not anyone has ever gotten married upstairs and then come into the library for their post-nuptial photo shoot. The real question, of course, is why my darling and I didn’t think to do this ourselves. I am officially apologizing to him and to myself right now for this terrible failure; they would undoubtedly have been the best wedding photos ever taken in the history of the world.

The City Hall branch is very small; also, a marvel of capital-A architecture from the 1970s (late 80s, according the TPL website, actually; but clearly the architect thought it was the 70s, except he didn’t hate sunlight.). It is one strangely shaped room possessed of windows and books and chairs and cds. It is possible, as I did today, to take a photo of it while it’s full of people and have it look as though it’s empty.

It really was full of people. Had I been capable of sitting down (I was not, thanks to those blasted purveyors of coffee made of bad dreams and double-tailed mermaids), I would not have had the option because all the chairs were full. This is always a good thing in terms of accumulating evidence of the importance of libraries; unless, of course, you want to sit down.

I didn’t ask a question and I didn’t open any books but I saw two Great Things. First, a meta-fictional moment with enough layers of meta that I think I won’t even try to explain.

Okay, maybe I will. This is a mystery novel about Old City Hall, which is across the street from where this library is, i.e. inside New City Hall. I’ve never been in Old City Hall and I have no idea what goes on there. City things happen in New City Hall. In Old City Hall, perhaps old civil servants languish and wander–. Never mind, I don’t know where I’m going with this. I haven’t read this book and I probably won’t. People whose advice I likely wouldn’t take recommend it highly.

I also saw this, and suddenly the library seemed extra-magical (all libraries are essentially magical; this just increased the intensity):

An olde-timey pencil sharpener!!! This really doesn’t belong in all the glass and high ceilings and total lack of children anywhere that is the City Hall branch, and that’s why it’s so amazing. It made me feel a strange nostalgia for the terrors of elementary school. Then I wondered if it worked but I didn’t have a pencil with which to try it out; I didn’t and still don’t know whether or not this is just the carcass of a pencil sharpener or a Real Live pencil sharpener, because isn’t there supposed to be a casing around those gears with holes in it for different sized pencils? I majored in English and don’t know anything at all.

Just outside the main entrance to the library were portraits of Toronto’s poets laureate (poet laureates?), including our present one, George Elliott Clarke.

George Elliott Clarke is the only living poet whose work I respect and enjoy. Literally the only one. He is the only person to write good poetry since 1600 or something. None of these effusions and shameless hyperbole are related to us both being survivors of growing up in Nova Scotia and doing PhDs at Queen’s University. No really, I only found out he did a PhD at Queen’s when I was listlessly browsing through the archives of all the completed dissertations in my department. I was surprised and felt sorry for him, and then for myself.

G.E.C. is great and deserves to be Poet Laureate not just of Toronto, but of ALL CANADA. Here’s a poem from Execution Poems, which I’ve read three times; not many books get a triple-read around here, so you know it’s special:

Rue: When Witnesses sat before Bibles open like plates
And spat sour sermons of interposition and nullification,
While burr-orchards vomited bushels of thorns, and leaves
Rattled like uprooted skull-teeth across rough highways,
And stars ejected brutal, serrated, heart-shredding light,
And dark brothers lied down, quare, in government graves,
Their white skulls jabbering amid farmer’s dead flowers –
The junked geraniums and broken truths of car engines,
And History snapped its whip and bankrupted scholars,
School was violent improvement. I opened Shakespeare
And discovered a scarepriest, shaking in violent winds,
Some hallowed, heartless man, his brain boiling blood,
Aaron, seething, demanding, “Is black so base a hue?”
And shouting, ‘Coal-black refutes and foils any other hue
In that it scorns to bear another hue.” O! Listen at that!
I listen, flummoxed, for language cometh volatile,
Each line burning, and unslaked Vengeance reddens rivers.
I see that, notwithstanding hosts of buds, the sultry cumuli
Of petals, greatening like the pluvial light in Turner’s great
Paintings, the wind hovers –  like a death sentence –  over
Fields, chilling us with mortality recalcitrant. (Hear now
The worm-sighing waves.) Sit fas aut nefas, I am become
Aaron, desiring poisoned lilies and burning, staggered air,
A King James God, spitting fire, brimstone, leprosy, cancers,
Dreaming of tearing down stars and letting grass incinerate
Pale citizens’ prized bones. What should they mean to me?
A plough rots, returns to ore; weeds snatch it back to earth;
The stones of the sanctuaries pour out onto every street.
Like drastic Aaron’s heir, Nat Turner, I’s natural homicidal:
My pages blaze, my lines pall, crying fratricidal damnation.