Sheetal Lodhia and I met in grad school. We both did Very Serious academic work studying the English Renaissance; we had the same thesis supervisor. Which makes it extra funny that I don’t recall ever talking to Sheetal about the Renaissance, even when we found ourselves at the same conference in Toronto one year. (I don’t know what year; the grad school years are a rather horrid blur that I’d like to keep blurry, thank you.)

What I do remember about that conference is that she gave me some of her mother’s homemade (as in made that morning) roti and I wondered why I would ever want to eat anything else for breakfast ever again. Not that I’ve ever actually made roti, in spite of taking a vegan Indian cooking class a few months ago. It’s not for lack of belly-willingness, believe me; it’s that I have the exact wrong kind of stove. It is the horrific opposite of a good gas stove–it is a shitty ceramic stove. Dammit.

We’ve bonded over pop music (JT and Rihanna, especially; no one else has ever been willing to discuss the musical merits of either of these performers with me), celebrity gossip, and before it started to suck, So You Think You Can Dance? We still both like dessert though, so that’s alright. 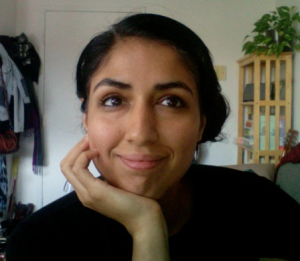 What is the one book you love so much that you can’t be objective about other people not loving it as well?

Travels into Several Remote Nations of the World (a.k.a. Gulliver’s Travels).

It’s a potboiler called The Eight, about chess, the French Revolution, and the beginnings of O.P.E.C.

How young are we talking? When I was really young, I loved the Enid Blyton books, then went on to Kipling, Nancy Drew and Judy Blume, and then started into Victorian children’s books like Alice Through the Looking Glass, and Peter Pan—colonialist tinged with Americana.

Who is your literary boyfriend or girlfriend? (They need not still be living, or they can be a character in a book.)

Haven’t had a crush in a while. Atreyu in Neverending Story, but I seriously think the movie version influenced me. In undergrad it was Arthegall (and I wanted to be Britomart)—
perhaps Atreyu and Arthegall are both versions of the same man?

What’s the strangest/most interesting/creepiest/most amazing thing you’ve ever found inside a book?

I bought a King James edition of the bible, which was probably printed in the early 1900s, from a used-book shop. Taped to the inside pages were three obituaries of people from the same family. I didn’t find that creepy, but rather kind of fascinating and touching that someone would choose to put obituaries in a bible. The grossest things I have found in books are boogers in library books.  It’s surprisingly common, and, for a while, turned me off library books.

Do you have any reading superstitions?

Not so much a superstition as a cultural convention—Indian people don’t put books on the floor, near shoes or touch books with their feet. To this day, I am horrified when I see people kick books or move them with their feet.

Anything by Ayn Rand.

The Chronicles of Narnia’s descriptions of Turkish delight and treacle.

Reading and eating simultaneously, yes or no? Dangers and benefits?

Yes! My most enjoyable breakfasts have been ones where I am reading and eating. Downsides include missing your mouth with your spoon or fork, or dropping food on your books. It’s necessary to eat the kind of food that doesn’t require both hands to eat. There are, I suppose, spiritual/yogic downsides to eating and reading, in that you are not necessarily eating mindfully. But, seriously, what’s better than reading and eating at the same time?

Have you ever read a cookbook front to back like a novel? What was it, and what story did it tell you?

No, but I think I’m in the minority. I grew up learning to cook in an Indian vegetarian household. That means no measurements, no set ingredients and learning to make adjustments based on availability of food, number of people, time of day, season, weather, etc.  What that also meant was that I wasn’t really taught to seek out books for recipes, because that was a totally western empirical approach to cooking.

That said, I enjoy the food and drink magazine from the LCBO because of the food photography, and, for that reason, also love the Barefoot Contessa’s books and Martha Stewart’s books and magazines, even though these are “Hollywood” food books. Perhaps the Rebar book is the closest one I’ve come to reading cover to cover. And that book taught me that vegan desserts are frequently more tasty than non-vegan ones.

What was your first cookbook? Do you still have it? How does it reflect who you are?

My first cookbook was The Joy of Cooking. I still think of it as a gold standard for understanding French and Italian basics. I love it because it’s a good old-fashioned book. The index is invaluable and lists recipes by name and by ingredient. There’s also the histories of ingredients and foods section. The archivist and bibliophile in me appreciate the index. The internet can never replace a good hard-copy index. But I don’t really follow recipes as they are written. More often than not, I look at a recipe as a suggestion on how to combine ingredients.

Is it okay to write in cookbooks? What about novels or books of poetry? What’s the difference?

You must write in them to note differences between what you did and what the book says, especially for baking. I rarely follow a recipe exactly as it’s written. I also like to write in books of poetry and novels. I put lines beside passages that are delicious and write notes in the margin. I love finding books with judicious amounts of marginalia too—nothing grossly highlighted or excessively underlined.

Describe what for you would be the bookish equivalent of an ice-cold lemonade on a hot summer day? How about a steaming hot chocolate on a freezing January night during a snowpocalypse?

Lemonade equivalent would be non-fiction prose—essays on topics that interest me. Hot chocolate would be a good potboiler, or a novel with rich characterization.

Where can you comfortably eat but not read, and vice versa? What do these little hang-ups say about your commitments to good food and good books?

I can comfortably read on the subway, both standing and sitting. But I can never comfortably eat on the subway. I hate eating on the subway and in libraries. I can also read while lying down, but can’t eat that way. I can read in all the places I can eat, but cannot eat in all the places I can read. I think all of those point to my Gandhian sense of food consumption and my germophobia.(Though Gandhi would probably disapprove of my reading and eating together habit.)

If you could replace those little Gideon Bibles in hotel room nightstands with any book at all, what would it be? What would you have left on guests’ pillows to replace the ubiquitous mint?

Fortune cookies on pillows.  A guidebook to the city you’re staying in instead of bibles.