Terry Woo is a dry, straight-talking, hilarious, bitter, genius who I don’t know very well, but who I like a lot. Here’s what I know about Terry:

He once encouraged me to run away to South Korea to marry Psy, so my husband could hang out with him (Terry, not Psy) more often.

He likes my friend Sarah‘s blog, The Catastrophizer, very much; he didn’t even try to pretend either that he wasn’t disappointed it wasn’t my blog, or that he couldn’t give two tiny shits about Jam and Idleness.

His wife makes the best goddamn vegan chocolate chip cookies in the world. (I should probably post that recipe one of these days. Or maybe I shouldn’t; maybe the world can’t handle it.)

Here’s Ter! (Damn you and your flexible neck and spine, Ter.) 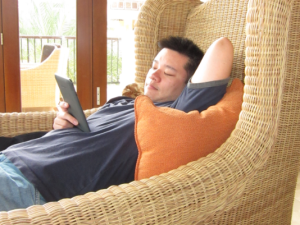 What is the one book you love so much that you can’t be objective about other people not loving it as well?

I can’t resist the temptation to be narcissistic here, so I have to go with Banana Boys!  You can’t live with a book that long – in my case, 8+ years – without becoming totally and irrationally biased towards it.  I haven’t actually picked it up and read it in a long time, but it still feels like a fishhook to the heart if and when I hear criticism about it… 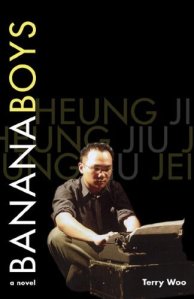 On a non-narcissistic bent, it would probably be Starship Troopers by Robert Heinlein.  I think a lot of people really misunderstand it, dismissing it either as a fascist glorification of militarism (see Tom Clancy below) or middle-brow Science Fiction not on par with The Giants of… (as Martin Prince on The Simpsons puts it).  While the characterizations are someone stilted, the ideas on citizenship, civic service, and sacrifice are very, very apt in this day and age, considering the edges of chaos we’re all treading on.  I really do wish more people would read it and take it to heart.

How did the experience of writing and publishing a novel change how you read?

I hate to say this, but I sort of stopped reading after Banana Boys was published.  For some reason, I just lost patience with a lot of books I started with (see “didn’t grab me within first few pages” comment below), and I mostly read free internet-based non-fiction news articles and essays these days.  It might be a correlation and not a causation, it might be the result of corporate cynicism based on working too much, it might be the result of a few metaphorical and chemical frying pans to the head… but I definitely don’t take as much joy in reading what is considered more traditional fiction in the here and now.  I feel a little sad about that…cue “Father and Son” by Cat Stevens playing in my head here.

The Man in the High Castle by Philip K. Dick.  Much better known for books that movies like Blade Runner and In a Scanner Darkly are based on, this book was the grandfather of all “alternate history” books with a classic premise:  what would the world be like if the Axis Powers (Germany, Japan, Italy) won World War II?  The characterizations were also somewhat stilted, but the historical details were phenomenally well-fleshed out for such a relatively short book.

It also contained several astute and penetrating observations about the state of race in the world – especially on how Asians would be viewed / are viewed based on a theoretical Japanese victory – both in the alternate reality, and our own.  (Sadly, they / we don’t fare too well in either scenario…which sort of marries perfectly with my own cynical view on race relations).

Mine would have to be the novelization of Indiana Jones and the Temple of Doom by James Kahn.  I read a lot of movie novelizations when I was around 12 years old, but this one really stood out as being head-and-shoulders better than the movie itself – rich in description of the Shanghai nightclub, drought-stricken India, the blood-thirsty Thuggee cult, and the fluid sarcasm and tenderness of all the characters (absolutely NOT stilted!).  It really influenced a lot of my own writing.  I heard that Kahn was a medical doctor graduate – which sort of explains the intricate detail in his writing – and went on to write and produce a few episodes for Star Trek:  The Next Generation, and Star Trek:  Voyager.  Neat!

Do you have any reading superstitions?

This isn’t really a superstition, but if a book really captures me, I tend to binge on factual information on the topic and author afterwards – starting with Wikipedia (yes, I know).  Definitely a lot easier in this day and age with the Interwebs – and everyone’s candid and not-entirely-useful-or-logical contributions to it.  Strangely enough, I tend to forget a lot of the factual stuff I read somewhere down the line, with odd shards of it popping up over beers with friends.  (This must be a direct result of far too many beers with not-enough friends.)

This doesn’t exist – I’m not certain if I’ve ever made it through a book that didn’t catch me in the first few pages, much less one that I detested, so I’m not really in a position to talk about that sort of book.  (And this included school readings – thanks Coles Notes!)  Considering I live with someone who watches Party Mamas, Say Yes To the Dress, and The Real Housewives of Idiotsville, I sincerely believe I have larger marital problems.  (Joking – still married after six dreck-filled reality-television seasons).

What would your ideal desert island book be?

I’d like to say it’s a deep and intricate book that you learn from every time you read it – Catcher in the Rye, Heart of Darkness, something encyclopedic by Tolkien – all of which I love, by the way.  But I think I’ll have to stick with the middle-brow aesthetic I’m living these days and it would have to be Son of Interflux by Gordon Korman.  It’s an easy-going read with great and quirky characters – and fairly sophisticated for something considered in the “Young Adult” genre.  Then again, something with the detail of The Lord of the Rings Trilogy would certainly keep me from talking to a Wilson Volleyball or worse…at least for a little while.

Reading and eating simultaneously, yes or no? Dangers and benefits?

This is an enthusiastic “Yes” ever since I got my Kindle.  Prior to that, greasy chip and cookie stains on pages were a non-starter, especially if the book was borrowed.  My favourite is a trans-fat-laden coffee cake with a thermos of Pike at the local Starbucks (continuing with said middle-brow aesthetic)!

Is baking really a science? If so, what would a doctoral dissertation in baking comprise? Experiments, hypotheses, results?

Absolutely a science, yes!  Two things in my life that cauterized this into me brayne:

Mom (not a great cook or baker) experimented with baking for a while when we lived in Europe.  Only she arbitrarily changed ingredients and amounts, resulting in rock hard or watery baked goods.  We still laugh about it today.

Wife (really excellent baker), who is cultishly-fanatical in the kitchen when baking.  A few years ago, she went through a macaroon-perfecting stage, which resulted in container-fulls of not-so-perfect macaroon-shells all over the house because even though they didn’t meet her standards, she didn’t want to waste the food.

I wouldn’t be able to imagine what a doctoral dissertation on baking would be like, but the two anecdotes above would make great bases for a few columns at least, with some sort of important life-morals to conclude with.  It’d sure beat anything Margaret Wente would come up with, in any case.

What can you comfortably eat but not read, and vice versa? What do these little hang-ups say about your commitments to good food and good books?

I’m a total steak and potatoes guy so…. Steak and Potatoes.  Reading – not so much.  As you might be able to tell so far, I’ve lived a lot of my life under some sort of hyper-masculine overcompensation (likely because I was beat up a lot as a kid in the jerkwater hellhole I grew up in Southern Ontario), but as you get older, it all seems sort of ridiculous – and reading that sort of thing, kind of repulsive.  Sort of explains why I went through a heavy Tom Clancy-stage, but wouldn’t touch anything like that today.  (With the exception of Without Remorse, which is a great, great revenge story.)

If you could replace those little Gideon Bibles in hotel room nightstands with any book at all, what would it be? What would you have left on guests’ pillows to replace the ubiquitous mint?

Great question – and I’ve totally experienced the answer.  On our second trip to Hawaii, we stayed a few nights at the Mauna Kea Hotel, which is owned by some Neo-Buddhist billionaire who bought and developed the property in the 70s.  In the hotel room nightstand was not a Gideon Bible, but Selected Readings from the Buddha.  Maybe it was the environment and state of mind also, but it was very enlightening.  The state lasted precisely one week after I got back, when rat-race-thinking invaded my atman once again, goddammit.