In 1894, a wonderful thing happened: a mostly unknown writer, but a very well-known illustrator for magazines such as Punch (George du Maurier), published a strange, unique, and utterly irresistible novel (Trilby). du Maurier was convinced to write at all by his good chum, Henry James. That he was convinced to write by a successful writer who liked him is lovely but not really surprising; what is surprising is that Henry James had anything at all to do with this novel.

I am not a committed anti-Jamesian; indeed, I recall enjoying The Portrait of a Lady and parts of the first volume of his complete short fiction. But Henry James was not funny; nay, I wouldn’t be surprised to learn that he was afflicted with a fatal and very real allergy to whimsy of any sort. And yet, here’s Trilby…

Trilby is a hilarious, somewhat bombastic, tragic, frolicsome romp through the lives of three young English artists living in Paris in the mid-19th century. The Laird, Taffy, and Little Billee–all talented, but Little Billee is a genius–share a studio and firm friendship. They’re all good men, but the Laird and Taffy feel a certain protectiveness for the younger Billee who is small, pretty, sensitive, emotional, susceptible and really vulnerably good. Together, they enjoy life in gay Paree without any complications whatsoever until one Trilby O’Ferrall barrels good-naturedly into their studio. 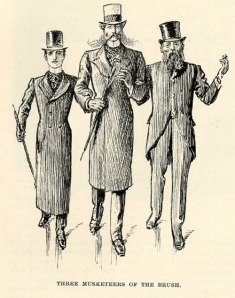 Trilby O’Ferrall is an artist’s model, of no pedigree and even less education, a free spirit (feral, but the opposite of vicious), and completely guileless. Her entrance into the lives and studio of the three English “musketeers of the brush” is A Very Important Event, for it will radically change all their lives, and forever. She’s like no one they’ve met before (and like no one I’ve met in 19th-century literature, certainly!):

Suddenly there came a loud knuckle-rapping at the outer door, and a portentous voice of great volume, and that might almost have belonged to any sex (even an angel’s), uttered the British milkman’s yodel,”Milk below!” and before any one could say “Entrez,” a strange figure appeared, framed by the gloom of the little antechamber.

It was the figure of a very tall and fully developed young female, clad in the gray overcoat of a French infantry soldier, continued netherwards by a short striped petticoat, beneath which were visible her bare white ankles and insteps, and slim, straight, rosy heels, clean cut and smooth as the back of a razor; her toes lost themselves in a huge pair of male list slippers, which made her drag her feet as she walked.

She bore herself with easy, unembarrassed grace, like a person whose nerves and muscles are well in tune, whose spirits are high, who has lived much in the atmosphere of French studios, and feels at home in it.

This strange medley of garments was surmounted by a small bare head with short, thick, wavy brown hair, and a very healthy young face, which could scarcely be called quite beautiful at first sight, since the eyes were too wide apart, the mouth too large, the chin too massive, the complexion a mass of freckles. Besides, you can never tell how beautiful (or how ugly) a face may be till you have tried to draw it.

But a small portion of her neck, down by the collar-bone, which just showed itself between the unbuttoned lapels of her military coat collar, was of a delicate privetlike whiteness that is never to be found on any French neck, and very few English ones. Also, she had a very fine brow, broad and low, with thick level eyebrows much darker than her hair, a broad, bony, high bridge to her short nose, and her full, broad cheeks were beautifully modelled. She would have made a singularly handsome boy.

As the creature looked round at the assembled company and flashed her big white teeth at them in an all-embracing smile of uncommon width and quite irresistible sweetness, simplicity, and friendly trust, one saw at a glance that she was out of the common clever, simple, humorous, honest, brave, and kind, and accustomed to be genially welcomed wherever she went. Then suddenly closing the door behind her, dropping her smile, and looking wistful and sweet, with her head on one side and her arms akimbo, “Ye’re all English, now, aren’t ye?” she exclaimed. “I heard the music, and thought I’d just come in for a bit, and pass the time of day: you don’t mind? Trilby, that’s my name–Trilby O’Ferrall.”

Trilby becomes entirely welcome in the three friends’ studio–and, whether any of them wish it or no, in their hearts. All three men, in varying degrees, fall sincerely and respectfully in love with young Trilby but it is on young Billee that she unwillingly shines the entirety of her gentle love. And here’s where the trouble begins: for while Little Billee loves her with his full being and doesn’t care a jot for his own pedigree being diluted by a mingling forever and ever with her lack thereof, his family does object, heartily and strenuously. Trilby suspects she won’t be wanted as part of her lover’s family and so rejects his proposal a full twenty times before succumbing; but then his family arrives in Paris and successfully convinces Trilby of her unworthiness and to break the engagement…whereupon, both Little Billee and Trilby, as sensitive and truly loving people, both go mad and almost die. His mother does not relent.

Little Billee convalesces in his country home but is broken; he feels nothing for a solid six years or so, although he continues to paint and makes a brilliant career for himself. He is morbidly depressed but good at faking normal behaviour for those who love him. But blowing his brains out is never completely off the table for him.

And what of Trilby? When she promises Little Billee’s mother she won’t ruin her son’s prospects by an undesirable marriage, she leaves Paris with her younger brother (their parents are long dead). She takes her sibling to the country to try to begin again but he dies shortly after the move, and she then loses her mind and goes missing.

Now, life in Paris is not completely free and easy for Trilby before she is confronted by the social complications associated with a marriage to Little Billee. All along, she’s been dogged by a villain of terrible and irresistible aspect: Svengali!

Svengali is a truly odd sort of villain but there’s no question that’s what he is when du Maurier introduces him; he is, we are told,

…a tall, bony individual of any age between thirty and forty-five, of Jewish aspect, well-featured but sinister. He was very shabby and dirty, and wore a red béret and a large velveteen cloak, with a big metal clasp at the collar. His thick, heavy, languid, lustreless black hair fell down behind his ears on to his shoulders, in that musicianlike way that is so offensive to the normal Englishman. He had bold, brilliant black eyes, with long, heavy lids, a thin, sallow face, and a beard of burnt-up black which grew almost from his under eyelids; and over it his mustache, a shade lighter, fell in two long spiral twists. He went by the name of Svengali, and spoke fluent French with a German accent, and humorous German twists and idioms, and his voice was very thin and mean and harsh, and often broke into a disagreeable falsetto.

Jewish! Unwashed! Hairy!! How could this man be anything but bad news? (du Maurier is delightful in every way but he doesn’t disguise his horrible antisemitism; that said, his antisemitism is of a strange sort, for he and/or his narrator insists that pure Judaic blood is bad but a little Jewish blood makes everyone better at whatever it is they are called upon to do in life. Racial purists reading this book will likely finish it with a giant headache they can’t cure.)

Svengali is also a musical genius, a stalker (of Trilby), and a skilled practitioner of mesmerism and it’s these three qualities that spell Trilby’s doom. While still in Paris, Svengali–like everyone else–falls for the irrepressible Trilby and he spends a great deal of time telling her that if she doesn’t reciprocate, she’ll be possessed with nothing less than mortal regret! He is scary and pushy and unashamed and Trilby has no defense except a very natural revulsion; she has no anger, no head for stratagem to rid herself of this unwanted suitor.

So, when she goes missing from Paris and then from the whole world after losing both her lover and her brother, it is, of course, Svengali who eventually gets hold of her. She becomes his slave…but not the kind of slave you’re probably thinking of (this is the 19th century, remember): she becomes his captive nightingale, his indentured servant to song. This is a strange and unexpected development because, 1) Svengali initially seems to be your run-of-the-mill sexual stalker; and 2) when Trilby goes missing she is, literally, the worst singer in the world. Her milkman’s bellow is wonderful, as is her regular speaking voice, but her singing voice is nothing less than an affront to nature.

But Svengali possesses that rare combination of musical genius, an inclination for hypnotism, and a total lack of respect for others’ boundaries, and so Trilby spends several years entranced and learning to sing. Under the same conditions, she is introduced to the world as the embodiment of il bel canto, missing from the world for more years than anyone can recall. Little Billee, dead inside, sees his beloved again after six years when she performs on stage in London for a music-maddened concert crowd–and he starts to come alive again.

He and his brother musketeers of the paintbrush spend a great deal of time trying to figure out just what in gawd’s name is going on and eventually learn the truth–which is not only that Trilby has been Svengali’s creature for the years she’s been missing, and not only that she cannot recall anything of her illustrious singing career (for she performs only under mesmeric compulsion), but also that this is the only condition under which she can carry a note.

This is really one of the oddest books I’ve read.

I won’t tell you anymore; indeed, I’ve probably revealed too much; but really, the joy of Trilby is du Maurier’s whimsical, gentle, humane (except when it comes to his villain), and well-written delivery of his strange plot. This is certainly one of the most memorable, most unique, most enjoyable, most bemusing books I think I’ve ever read. And that I will, definitely, re-read–for it left me in a most pleasing state of confusion that I would already like to get back to.