Sarah Sweet is, in spite of her potty-mouth, a gentlewoman; she is a scholar. She loves cats, a fact which all by itself proves my preceding two claims. On the interwebs, she is known as The Catastrophizer. She is also my bestie.

The following is an incomplete but representative list of the things she’s given me over the years, and which have improved my life immeasurably:

She’s the nicest funny/mean person I’ve ever met. Warning: If you love Michael Ondaatje, Henry Miller, Henry James, or J.M. Coetzee you might want to skip this one. Or, at least, put on some armour. 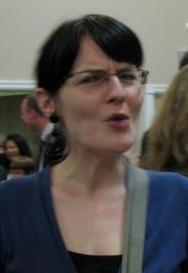 What is the one book you love so much that you can’t be objective about other people not loving it as well? Have disagreements ever come to blows?

George Eliot’s Middlemarch. It is just about the best book ever written in the history of the world. And I’ve never had to produce that as a grand, inarguable, disagreement-ending claim, because I’ve never met anyone who has read it and not liked it. I’ve met scores of people who announce smugly that they’ve never—because, of course, of its obvious length and tediousness—been able to finish it, and who imply that my love for it makes me the kind of person who would also appreciate nineteenth-century, parson-penned books about shrubs and hedgerows, but I consider those people to be terrible and not worth punching.

Dorothy Gilman’s The Maze in the Heart of the Castle (1983). Gilman is better known for her series of books about the adventures of an elderly lady spy, which I read avidly as a young person (because even as a child I tended to enjoy books also enjoyed by elderly ladies). My mother worked at a library, and she started bringing home other books by Gilman, and one of them was The Maze in the Heart of the Castle. It’s about a boy named Colin who, after being orphaned at sixteen, goes to see a man in a magic castle that has a maze in it (obviously) and asks him how he can go about relieving his pain. He ends up entering the maze (obviously) and the book then becomes a gentler, non-Christian, young person’s Pilgrim’s Progress.

In the course of his travels, Colin learns about the perils of competitive self-pity and paralyzing depression, finds out that gorgeous women can be stupid, wrestles with the notion that time exists and passes and carries good moments away from us, and discovers that even while trapped in a cage in a traveling circus, he can be free through the power of his imagination. It’s sensitive without being sentimental and full of Useful Morals without being sententious. I’ve never understood how it’s managed to stay out of print for years and years.

I love Madeleine L’Engle’s A Wrinkle in Time, but I love the second book in that series—A Wind in the Door (1973)—even more. I remember being delighted that the “angel” was monstrous and had many tentacles; I related to the fact that Meg found Mr. Jenkins profoundly irritating and difficult to like; perhaps in part because as a kid I was convinced that human beings might actually be bacteria living in the digestive system of some kind of giant, I found the emphasis on the irrelevance of scale when it comes to the Inner Workings and Fate of the Universe fascinating. I’d like to think that one of the messages of the book—small acts of love and compassion and appreciating people who are stupendously annoying might well seem insignificant, but they can maintain or restore the balance of the universe—made me a better and more compassionate person. But the lengthy, hate-filled screed I provide for the next question but one makes me think that was not at all the case.

Who is your literary boyfriend or girlfriend? (They need not still be living, or they can be a character in a book.)

I would date Archie Goodwin (the handsome, mouthy, disarmingly charming, insufficiently reverent associate of Rex Stout’s Nero Wolfe) but spend meals and after-dinner-drink times with Nero Wolfe (the brilliant, tubby, reclusive, lazy employer of Archie Goodwin). Also, we would all solve crimes together.

I almost ignored all the other questions in favour of writing a fifty-page response to this one, because I am a nasty, intolerant, judgmental person. But then I decided the things I hate the most would be more clearly showcased if I ignored the things I hate more recreationally, and I came up with these finalists, organized according to the reasons given by other people for my not appreciating them:

From The English Patient: “We die containing a richness of lovers and tribes, tastes we have swallowed, bodies we have plunged into and swum up as if rivers of wisdom, characters we have climbed into as if trees, fears we have hidden in as if caves.”

He forgot “books we have sunk into as if fetid swamps of portentous nonsense.”

Because I fail to appreciate the haunting beauty of ambiguity…

… I hate Henry James. I also hate being told I hate Henry James because I am uncomfortable with allusive and subtle mysteriousness. Reading ALL OF HIS STUPID BOOKS for my comprehensive exams had one unexpected benefit in that the possibility that other people had the fraught, over-wrought, self-absorbed, and yet strangely uneventful inner lives of his characters made me less concerned about not having more friends.

…I hate J.M. Coetzee. Disgrace made me intolerable to be around, because all I wanted to do was talk to people about how much I hated it and then get incoherently angry with them if they’d enjoyed it. The parts of my brain dedicated to remembering the book have since killed themselves, so all I can recall now is that there was something outrageously offensive about the girl-on-the-farm part, and something unintentionally silly about how the main character played a ukulele? In some kind of imaginary opera? Can’t remember exactly. But it was stupid. And it’s entirely possible that Coetzee did not identify with his main character and did not intend him to be the least bit appealing or interesting or complex—I have no textual proof for my suspicion that he found his egregiously awful protagonist to be appealing and interesting and complex. But I just KNOW he did.

Because I am a lady…

…I hate Henry Miller. I feel like I spent the years between 14 and 16 trying to convince intellectual, disaffected high-school boys that I did not hate Henry Miller only because I had lady parts…that my brain was not so bursting with estrogen that I couldn’t judge how interestingly and well an author was using words like “semen” and “leprous” and “ennui.” I have no problem with any of those words. I am not so troubled in my womb-brain by nastiness and the word “cunt” and a lot of talk about shit that I can’t respond like a reasonable, thinking person to a book that deals with such things in endlessly annoying ways.

From Tropic of Cancer: “I too love everything that flows: rivers, sewers, lava, semen, blood, bile, words, sentences. I love the amniotic fluid when it spills out of the bag. I love the kidney with its painful gall-stones, its gravel and what-not; I love the urine that pours out scalding and the clap that runs endlessly; I love the words of hysterics and the sentences that flow on like dysentery and mirror all the sick images of the soul…”

“This is not a book in the ordinary sense of the word. No, this is a prolonged insult, a gob of spit in the face of art, a kick in the pants to God, Man, Destiny, Time, Love, Beauty… what you will.”

Blah, blah, semen seeping from the desiccated asshole of an incontinent dog, I (Henry Miller) am fiercely unconventional and anyone who hates me does so only because he or she is a defender of soulless, sanitized Art and afraid of bodily functions and death and not because he or she thinks I am a tiresome and self-righteous douchebag.

What would your ideal desert island book be?

I wouldn’t want to be stranded with a book I loved, because I would end up either hating it or entering into some strange form of marriage with it. Instead, I would want to have with me either The Bible or J.R.R. Tolkien’s The Silmarillion—neither of which I’ve read all the way through. I would want one of those two because (a) they seem long and complex enough to sustain multiple readings, and (b) they would make me fight harder to survive and be rescued, because I would be desperate to return to society and be (a) one of those people who can respond to religious people who believe abhorrent things by citing actual sections of scripture or (b) a guest on Stephen Colbert who could outdo him in terms of encyclopedic Tolkien knowledge (and I would absolutely be asked to appear on The Colbert Report if I had, indeed, been stranded on a desert island with only The Silmarillion).

Have you ever read a cookbook front to back like a novel? What was it, and what story did it tell you?

No. I have never done that. Thinking about these questions has made me realize that while I really, really enjoy eating food, I don’t particularly enjoy reading about it. I respond the same way to descriptions of food in novels, for example, as I do to lengthy descriptions of landscapes: I get shamefully bored and try to read as rapidly as possible without being completely disrespectful. My reasons for not curling up with cookbooks are probably different, and likely have something to do with the fact that my culinary skills are so limited and my culinary ambitions so pathetically modest that looking at recipes I’ll never be in a position to prepare just makes me depressed.

Where can you comfortably eat but not read, and vice versa? What do these little hang-ups say about your commitments to good food and good books?

Nowhere. Not one place. There are places I do neither (I don’t eat or read in the bathroom, although I always wanted to be the kind of person who was relaxed and interesting and sensual and liked to read in the bath), but not one single place I wouldn’t do both. I believe this means I have no hang-ups of any kind or size and that I am a loyal, passionate, and uncompromising (except for the bathroom) eater and reader—when I’m not busy taking cookbooks for granted or skimming an author’s carefully crafted descriptions of forests and rivers and vistas.